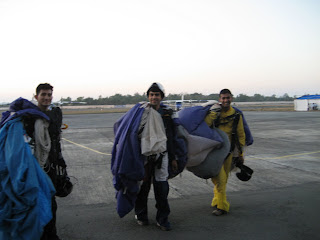 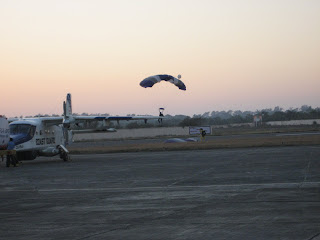 Still unaware that I'm going to be given a dream that will absolutely refuse to let go until fulfilled. I must have seen patients, slept in the afternoon, gone to the gym, met Bhavna mam and Sangita mam in the evening, but I don't especially remember anything. Oh yes, Shalini mam and I went to buy Winnie's birthday present. And she asked me why I hadn't seen their practice jumps. How could I have missed them? How could any amount of paperwork keep me from that kind of beautiful sight? I begged her to call me the moment they went up the next morning.

DAY 3. February 1. Coast Guard Day. (The Day Of The Blood Donation Camp). Very busy day. I was on my feet from seven in the morning to eleven in the night this day. At about 9.30 a.m., with the blood donation about to begin in 30 minutes…call from tower: MO madam to come to the tower if she wants to see the skydivers. I ran up the whole flight of stairs and commandeered the binoculars. "One minute to jump, madam!" Shalini mam and I ran out to the terrace. It is painful work…. Neck in hyperextension, eyes peeled wide…. where are they? Oh! Somebody has located the chopper! Look at 3'o'clock madam! Ok, so there's the chopper! Will I see them jumping out? Not the first time, no. A few seconds after they were supposed to have jumped, I see 4 chutes coming down slowly. All the pain in my neck is worth it. I wonder how they feel. Like birds? Invincible? I suddenly feel so jealous. That was the first time I saw skydiving in real life. And over the next four days, I did not miss watching it even once. No matter where I would be, "one minute to jump!" would bring me running every time. And with time, I learnt to see them jumping out of the chopper, then coming down together in free fall and then "tracking" which is just the technical jargon for separating and spreading away just before opening the chutes.

DAY 5.February 3. Saturday. The Penultimate Day Of The Mela. What is it about a group of four people in jumpsuits walking back to the hangar, dragging their chutes behind, that so tugs at the heartstrings? It's the same warm feeling you get when you watch a surgeon shrugging out of his OT gown after a surgery, the look of smug self satisfaction and happiness they have, the joy that comes from the knowledge that a job has been done well…

DAY 6. February 4. Sunday. Best Things For Last. I wake up with a song in my heart. Life suddenly seems so full of possibility. It seems like quite an achievable fantasy - jumping from 12, 000 feet. This whole day I had the typical mild blues that you feel when something good has to end. But it still is my favorite day of the mela because this is the day when Shalini mam and I went up to 12,000 feet and saw the jump from the birds' eye view. The experience will always be very high up in my list of best experiences ever. It will rub shoulders with the first time I scrubbed for OT and the first time I kissed.

It so happened that the number of skydivers went down from 3 to 2 during the last jump of the day, also the last jump of the mela. Shalini had been pestering the life out of everyone, wanting to go up 12,000 feet in the chopper. Today her request became all the more feasible with only 2 divers going up. She sat on the ACD seat while I was strapped into the harness on the floor, flanked by the two jumpers - Maj R.D. Singh and Capt Tushar.

R.D sir instructed me that the best way to watch them would be to go flat on the floor the moment they stepped out of the chopper with my neck hanging out.

Ok, sounds feasible to me sir. So, up, up, up we went, the temperature dropping every minute. I was shivering at 3000 feet and wondering what it would be like at 12000. At 11000, these guys stood up and solemnly checked each others' suits and backpacks…one, two, three, four, five, six…thumbs up. It had the quality of a prayer. And then they did that too. Feet planted firmly apart, they stood side-by-side, palms touching, they closed their eyes and RD sir mouthed a short something. Or maybe that way they just revise what they are supposed to do!! Then they faced each other, nodded and as simply as walking out of the house for a stroll, stepped out into the beyond. My heart was pounding, my eyes were stinging with the cold or maybe something else; but I didn't waste a microsecond before I fell flat on the floor and looked out from the side that RD sir had jumped from. It was a sight I will never be able to forget. Such a nonchalant expression, such comfort (of course they do it practically 5 times a day, might as well look comfortable!) For maybe 2 seconds I saw only RD sir, then Capt Tushar joined him and they went down together. I remembered what Col Verma had said the day before, "It's a sport made out of an emergency procedure" And what a sport it is. I was hanging out of the chopper with one hand on holding onto the harness and the other holding my glasses or they too would have happily followed these two gentlemen into the free fall. The two divers disappeared from my sight much too soon: and when I sat back into the chopper I seriously was feeling hysterical with joy. Nirmal sir turned back to look at me and reminded me to keep performing the valsalva. And then Bose sir pointed out the two divers again; they had opened their chutes and we saw these two small white flecks descending. When we landed I was incoherent for at least some time. Maybe half an hour or so later I was able to describe what I had seen. And since then I have been unable to stop talking about it. Or thinking about it for that matter.....:)
Posted by Manjot at 2/16/2007 12:52:00 AM

Email ThisBlogThis!Share to TwitterShare to FacebookShare to Pinterest
Labels: Skydiving