I had made some beginning of Term 5 resolutions - no more ODing on coffee, in bed by one a.m., alert in the 8.a.m. classes, no more Facebook...and so on.

It's quarter to 4 in the morning. I don't know how many cups of coffee I've been drinking, but it's been quite a  productive night. I've read two chapters in International Finance (two chapters done, five to go, exam tomorrow), reviewed a friend's resume, written and submitted two extremely pretentious essays - "Are we Breeding Ourselves to Death?" was the title of one. I should sleep.I have a class six hours from now and an exam twenty nine hours from now.

I feel happy. I'm remembering my evening and smiling - about how I spent two hours sitting in the garden with two of my best buddies on campus, grumbling about a billion things, including how I just don't seem to have time! And I'm scrolling through the FB status updates of the four hundred ISBians on my buddy list, chatting with people about random stuff (there are sixteen of them online at this point in time), listening to some old 60s and 70s favorite songs.... 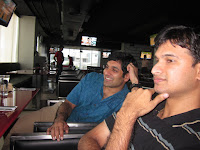 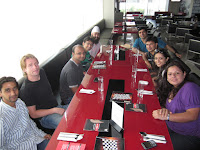 The Sunday Brunch Club is born 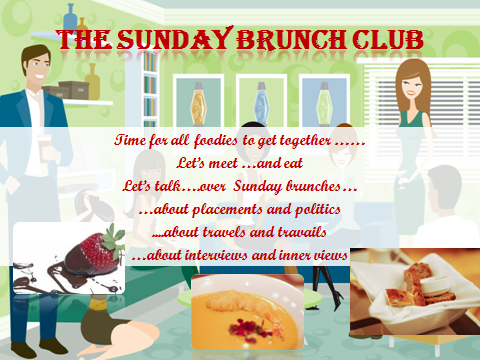 Call whoever you like - forward the invite to all your foodie buddies.
Send me your confirmations by tomorrow so I can call up the place and book. Transport not provided by the SBC – only bookings, and entertaining and insightful company.
Whether it’s 4 people or fourteen...Let’s just go !!
Love,
Manjot

I got replies within the hour :
Awesomme idea Manjot... I am so happy to hv made d cut. We foodies rock.Yash....
Awesome idea! I am in and so is Komal J....Namita Pant....