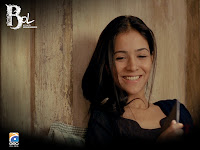 I wrote this formula about six months ago for how I choose movies to watch: Alien movies, no. Animation, yes. Disaster movies, no. Romantic comedies, yes. Horror movies, never. Period movies definitely. Family tragedies rarely, fauji movies, not even on the pain of death. Fantasy genre, always.

And then I watched Bol last night. The movie is disturbing at multiple levels, not the least of which is this: the passionate appreciation I feel for this movie might mean that I have overcome my absolute aversion of morbid films, that I have finally grown up!

I watched the movie with Divya, who's one of the most enthusiastic people I know. She loves and watches movies with an unequalled avidity (no, maybe Anmol can equal, or even top that avidity. It'll be a close contest). We argued about the movie on the way back - Divya feels that the film could have achieved so much more than it did, that the power of the story was diluted because the filmmakers wanted to make it more watchable. I disagreed, I don't remember when I've been so moved by a story.

I came back and read about 60 reviews, and it turns out that most reviewers echo D's sentiments. Bol was created by Shoaib Mansoor (http://en.wikipedia.org/wiki/Shoaib_Mansoor), the same guy who made the Khuda ke Liye (note to self: must watch this one soon). The general opnion seems to be that the first film wins because it has one single theme (terrorism) underlying the drama, while Bol may have bitten off more than it could chew, with a story that weaves in multiple issues, each more tragic than the other.
The movie is already a blockbuster in Pakistan, and it's doing well in India, US and Dubai; it does not really need me to defend it. But then again, I need to say this: What.A.Movie. To say that Shoaib Mansoor may not have lived up to the expectations he created with his first film is to deny the ache that this movie is capable of creating in your heart. It's the story of a family that lives in Lahore in the present time - humongous shopping malls and rock concerts coexist in perfect believability with a world that does not permit girls to get educated. Its the story of a family that conspires to live with dignity in a world that is so harsh and unfriendly that it's terrifying. A family that protects the father who terrorises and hates them (and who they hate in turn), because they do not know how to live without him. The movie moves from one heart breaking tragedy to another, with small bits of respite that are really small and really few. But they warm up your heart. The affection the sisters have for a brother that their father despises, the romance with the next door boy, the neighbours who secretly look after the family - I don't agree that these dilute the power of the movie. Because hope can be as powerful and as stark as the truth.

But heartbreakingly morbid as it is, Bol wins because it has actors that live the part. Even the loathsome father, Hakim (played by Manzar Sehbai), is someone that one can understand, and maybe even forgive a little. The female lead Humaima Malik, who plays the eldest daughter in the family, can be nothing but what she is in the movie - an unwanted child in an impoverished household, torn between fear and anger for the world she part of and cannot escape. That she is a 25 year old with a facebook fanpage is shocking, and a little unreal. The courtesan Meena (actress Iman Ali) who lives and breathes Umrao Jaan and Pakeezah, is awesome too. Contrast this with the Katrina Kaif and Imran Khan in Mere Brother ki Dulhan that I saw on Friday - they cannot be anything other than Katrina and Imran! Don't get me wrong, I enjoyed MBKD too, for all sorts of different reasons, and I adore Ms Kaif for the joy she brings into our lives. But she's not unforgettable. Not yet.

Email ThisBlogThis!Share to TwitterShare to FacebookShare to Pinterest
Labels: Reviews