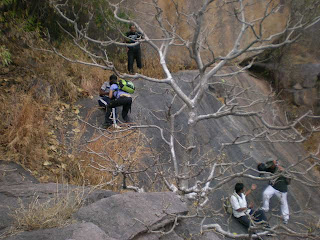 I remember and smile now, that sometime in end-April last year, I googled 'due diligence' because I was too embarrassed to ask these people who spoke in such foreign and fascinating tongues. April 2010 to January 2011- nine months of gestation which have created this new me. A strange creature, less giddy, more aware and more thoughtful - I love this version. Manjot2.0.

It was nine months of struggling to understand exactly what it was that I wanted to do post MBA. From being half sure that hospital operations would be my end goal, to enthusiastically looking forward to a career in healthcare consulting, what a thrilling journey it has been. It was nine months of wrapping my mind around brand new concepts; it's hard to remember how I understood life before beta and batna were parts of it. Nine months of crazy friendships - with friends who would think nothing of spending hours explaining things to me, all the while making sure not one opportunity to make fun of me was lost, of course. I will never forget how Neha ploughed my brain and planted regression into it like it had never been done before. And was so proud when I scored one mark more than her in the Stats exam. Peer learning was just a phrase last year; it is now what has recreated my thought process and perhaps my life's direction.

Insomnia strikes
Every once in a while.
I go take walks at 3 a.m.
and listen to that pink floyd and linkin park folder.
These are nights when the world feels like it belongs to me.
and every song makes perfect sense.

But I always wonder
if it's worth it.
Maybe
I'd rather not understand Comfortably Numb
Not feel one with the universe
Not see the big picture