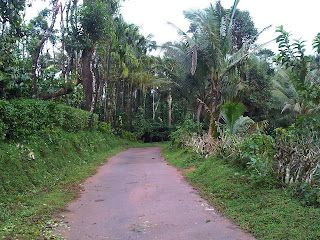 
I love these, as I love this Scotland of the East
The mists are hazy, and the rafting is crazy
So thank you Coorg, for so many things

the roads through the jungle


the home-stay, and the taboo
the Namdroling monastery

Hunting high and low, for the elusive coorgi food
Struggling against forces that threaten to kill the mood

the silly jokes
and friends who let you be

Email ThisBlogThis!Share to TwitterShare to FacebookShare to Pinterest
Labels: verse

“So how do YOU know Natasha?” Part One

Or, MY BEST FRIEND’S WEDDING

10.00 a.m. Sam’s home.
All weekends from now till the end of time, are going to try and compete with this one, and slink back ashamed. On the awesomeness scale of one to 100, last weekend just made a hundred and fifty. If it wasn’t for the insect bites I’m covered in (and can’t stop scratching), I may have found it hard to believe that I did not dream up the last couple of days. That and the fact that I’m humming as I write, the random song Prerna taught me as we were climbing Deer Hill -“One man went to mow, went to mow a meadow…..”
There are two reasons why I’m sitting up writing this even though my eyelids feel heavy with a wonderful cetirizine induced haze (for reason for cetirizine, refer to insect bites above). One, a memory as brilliant as this deserves to be saved, so that I can revisit it whenever things become drab. And two, like our grand old (and 23 years of age) cynic Prerna Nair said, this wedding has reaffirmed our faith in the sordid institution of marriage. Maybe the thing isn’t that sordid after all.

So here it is, the pensieve that I will create and keep, to visit often:
Saturday, 06 August, 2011, 7.00 a.m. I stumbled out, sleepy eyed, of the NSL Express and called Pre who instructed me to take an auto to ‘Bibi ka Makbara’ where she was waiting for me on her scooter. I sat on the scooter and felt two years melt away in the next instant. It was a ten minute drive to her house, and we did not even waste thirty seconds in small talk. That’s what best friends are like – it’s so easy to pick up threads of conversations that were started weeks and months ago.
But one sight of Pre’s Aurangabad home can make you completely forget what you wanted to talk about. You know how, when you go trekking, you see those homes in hills that look like they belong in fairytales, and you wonder – wow, who gets to live in places like this? We know the answer now – it’s Pre’s parents. The house is right at the foothill of a hill called hanuman tekri – it’s a hill covered in every shade of green that you ever dreamt of, and some that you did not even dream of. And when mists roll over it and around it, you just know that the whole rest of your life is going to be just fine.  I know this because I went for a walk, to the temple on top of the hill (women are not allowed to enter, but I no longer like to fight silly bigotry, so I said my hellos to the orange god from the door), sat where I could see for miles around and thought about a hundred things. And came back knowing that all was going to be well.
Pre’s parents are as warm and as full of life as you would expect them to be – where else would she get this awesomeness from? We had breakfast, resisted the temptation to climb the other hills around their house, and headed to the pair who had planned a wedding ceremony that was going to make all wedding ceremonies pale in comparison.

Natasha is one of the most beautiful women I have ever known, and she looked more radiant than she has ever looked. It warms up my heart to see the happiness and the calm that she seems filled with. No pre-wedding jitters for this girl. She knows she’s where she belongs and I feel so happy for her. And Sam looks like he’s sitting on top of the world, as he very likely is. And my happiness for Natasha grew tenfold as I met Sam’s parents – they were so enthused over the unique ceremony that their children had dreamt up. Not for them the regret of missing out the traditional wedding drama, the crowds of hundreds to show off to….this was going to be a celebration of love and the entire family seemed to just get it!
I met Lakshmi, after nearly two years. She hugged me and said, “Congratulations, I’m so proud of you and so happy for you, do you know that?...” It was the same magic with her, we were able to start conversations from the middle, leave them lying around like dismantled clockwork, to pick them up, take them apart and put them together as we went through the day. And what a day it was.

I met some of Natasha’s friends that first morning. And if you said the magic sentence -"So how do you know Natasha?" - the most exciting stories came tumbling out. From Andamans to Delhi, we all came, to attend to the wedding of this unique creature who has made friends wherever she has gone. And she just threw us together, knowing that we would find each other interesting and get along famously.

11.00 a.m. Bibi ka Makbara and Ellora caves
I had my second breakfast of the day at Sam's home, and went with Lakshmi and Pre to Bibi ka Makbara, the Taj Mahal look alike that Aurungzeb’s son built for his mother. It’s quite beautiful, even though it’s touristy and I recommend a visit. For me it will be the place where I walked around with two women that I respect and love so much that surprises me. They’re so unlike each other, and yet so alike - strong, opinionated, capable and yet both filled with self-doubts that are amusing to their own rational selves. We had strict instructions to be back from Bibi ka Makbara in an hour and a half and that’s exactly what we did, somehow also squeezing in a visit to the passport office that Pre needed to make.