A "healthy" lifestyle is a moving target

A couple of weeks ago I stumbled into the keto* jungle: read dozens of scientific papers for and against, wolfed through a hundred threads on Reddit, and decided I was ready. Ten days into the diet, still unsure about how good an idea it has been, I read that Audrey Hepburn lived a long and productive while indulging a pasta obsession - two big plates of spaghetti and ketchup every day. That is probably 200 grams of carbs daily (Keto-ers stay under 20)! Gah, what if carbs aren’t the enemy? I worry that my goal to be fit enough to run half marathons into my dotage is a chimera.It is dependent on many sub-goals, all of which keep shifting. I have nightmares about a wise, handsome physician shaking his head over 70-year old me, saying – lady, if only you had taken more care in your 30s, your bones might have been healthier! Sigh. 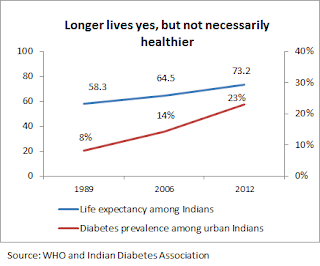 In general, this generation is believed to be the healthiest that humans have ever been. And yet, there is so much to worry about. We’re living longer, more active lives, but we also get chronic illnesses far earlier.We're more aware, understand diets/exercise regimens better and have the money to indulge in them.  But we’re also more obese, more prone to getting type II diabetes and less likely to be shocked at thirty year olds getting diagnosed with hypertension. The reasons for our doom are also entrenched in our good fortune (we all know what they are, but let me quickly run through them): easy access to processed food, fulfilling careers that leave no time for exercise, wonderful entertainment options which keep us glued to devices. It’s easy to conclude that people who worked with their hands and ate simpler food easily lived healthier lives, and we’re all going to get coronaries in the next decade.

It doesn’t need to be that simple (or that grim): we can use the advantages of this century to win this round too. And here’s when I finally come to the point of the post after all the rambling – how great is it to turn the technology that keeps us sedentary into the very thing that keeps us healthy? Long before my brother gifted me the Fitbit, long before I saw RemedySocial, I have been interested in measuring health indicators. I recently found a diary entry from the year 2000, which lists my weight, blood biochemistry parameters and says that I can run 5 km in 26 minutes. It is amusing, but I don’t need those notebooks anymore. It has become easier to keep track of your health in this decade.

I've recently learned about RemedySocial, a brainchild of Dr. Purav Gandhi and team, who have developed an algorithm to assess a person's risk of contracting 14 major diseases through an online assessment. The platform gives you a score, compares it to others with similar demographics, and gives you advice on the specific health indicators you should start tracking. He puts it well: “Our health is undeniably a downward curve, but we can change its slope! We can make the curve flatter by making early interventions. Good genes don’t last forever.” I took the assessment which took slightly longer the promised five minutes, but I was expecting that. The detailed report that came through was impressive. My short term wellness scores were good (yayy!) but my long term health risk scores were, well, interesting. I might have underestimated the health risks that I face given my life style choices and family history. The platform suggested targeted lab tests and health tips that I needed to follow – just the food that my data obsessed brain needs.

I’m suddenly noticing a spate of health-related apps; what this one does may not be unique. But I’m happy to recommend them because their approach is fresh and fun, and I was amazed at the sheer number of insights the algorithm was able to extract. It doesn’t matter what health tracker you use, as long as you use one.While I continue to think that perfect health will remain a moving target, it might not a bad idea for us to keep moving in its general direction, to be more aware of our own bodies, and to take control of how healthy our own future selves will be.

Disclaimer: Dr. Purav Gandhi, the founder of RemedySocial, is an ex-colleague and a friend, and this blogpost is partly motivated by my hope to make his venture better known. All the views above, however, are my own.


*Keto is a diet philosophy that says the human body functions more efficiently if it uses fats rather than carbs as primary fuel, but that’s all I’m saying. More on keto in another post
Posted by Manjot at 6/21/2015 10:32:00 PM

Email ThisBlogThis!Share to TwitterShare to FacebookShare to Pinterest
Labels: Health