The Best Wedding Ever - II

My brother and I turned from enemies to best buddies somewhere in the late 90s. Among the few things we had in common was a dislike for attending weddings. I hated dressing up but could sometimes be lured by the promise of great food.
The poor guy enjoyed neither. After yet another argument with our long suffering father who hadn’t given up on us back then, Jitu had attended some function or another, come back, sighed philosophically and said, “You know what Manu, my wedding will not be boring. I’ll not have these stupid receptions and things. I think I’ll have a cricket match to celebrate my shaadi.” And I had said Yeah, and I’ll get married on a boat.

With time, his plan only became firmer, clearer and more detailed. How I love it about my no longer little brother that age and maturity never succeeded in leading him to believe that his idea was anything other than perfectly feasible. 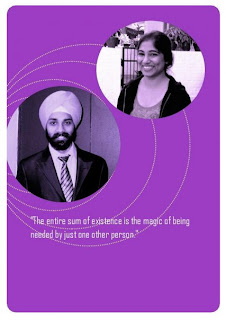 In 2003, when we went on a toy train trip to Simla – “I’ll get married in Simla! The baraat will travel in the toy train! There must be Gurudwaras in Simla, right? Wow, think about that – a cricket match in Simla…”
In 2006, after he came back from a trip to Shoghi, - “Manu, you HAVE to see this place. It’s a resort called Park Woods, it’s about 20 km outside Simla, and it’s beautiful. It has tents and cottages and its ideal for a wedding party!”
We will pass lightly and respectfully over the next three – three and a half years. My brother grew into this self assured MD of the software firm that he had set up fresh out of engineering college, and met the girl who, before anything else, became his best friend. And as we knew Rubal better, my mother and I always felt she was so much more to him – but I will not dwell on the romance part here. The post is about the wedding!
Cut to February 2010. The fact that we had less than two weeks to plan the wedding had not prevented Jivi from being all gung ho about his old dream. To charter the toy train for 50 people and then to book the entire resort for two days was the first thing he must’ve done the day our parents met Rubal’s family! The tough part was to convince Mom and Dad that the idle dreams of nearly a decade ago were about to become reality. Not have a reception? My parents, cool dudes though they both are, could not swallow that the wedding of their only son would not be celebrated by a reception for their friends. And Jitu was unwilling to forego of his crazy fantasy of loading only the closest of his friends and family in a toy train and carry them off to Shoghi for a bonfire and a cricket match. So we reached a compromise. We had the formal reception and the Shoghi trip both.
Jitu and Rubal designed a card that made jaws drop; my dad somehow convinced a guy to print some 200 cards in two days; Chacha-Chachi in Kapurthala shopped for an average of 4 hours every day for some 10 days; my mother spent the evenings calling people up and packing presents – and then Leena and I landed in Chandigarh on 07 February, six days before the wedding.
Time to introduce Leena. Leena is our 21 year old baby sister (the daughter of our adored Chachu, the poor thing will be our baby even when she is 41, I think). She’s studying to be a dental surgeon and dreams of arming herself with an LLB degree and running an NGO sometime. Blessed with the two of us, the one thing Jitu and my parents did not worry about was the wedding shopping. 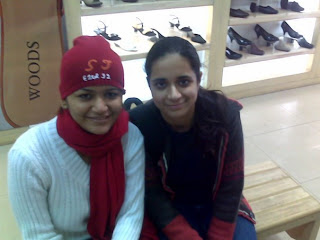