Sunday, 07 Feb 2010. We celebrated the fact that the wedding was exactly four and a half days away by waiting for a table at Mainland China for 50 minutes. It was a very constructive 50 minutes; Leena, Rubal and I made lists and crossed items off them (always such a thrilling exercise for me). I’ve known Rubal for some three years now and I had never seen her as happy as she was that night.
Monday, 08 - 11 Feb 2010.
The next three days are a blur of shopping. I’d never even noticed the men’s departments in stores before this. Imagine two girls going through hours of shopping in Woodland, Esprit, Van Heusen, French Connection, Calvin Klein, Benetton and Wills DURING THE SALE SEASON – and not looking at womenswear! It made us so giddy that we spent an hour in a bookshop buying books and stationery for each other – and picked up a book for our new sister to be, a book called “How to kill your husband”. And it was so much fun watching Jitu turn into a clotheshorse; we must’ve made him get in and out of some three dozen shirts, trousers and shoes. 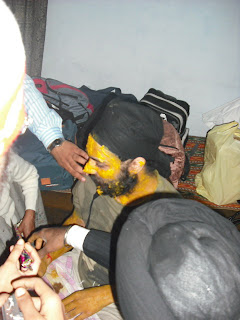 Who came up with the idea of anointing Jitu with the ubtan( it is ubtan, right?) I was instructed to bring some besan from the kitchen and mix it with some water, milk and malai. The bridegroom to be was pinned into a chair by a houseful of people laughing and shouting so hard it was unbelievable. I did hear his plaintive cries of –“Please,please, no malai…..I hate malai, please! What IS going on? What are you planning to do to me?” So I skipped the malai, added cold cream instead. Then other people took over and god only knows what else went into that hideous looking concoction that was to be applied on Jitu’s face. What a lovely tradition….I couldn’t stop laughing. Puneet had gotten on top of a chair to secure the best vantage position for the video that he was making. Oye Puneet, where are those pictures/videos?
I will not go into the details of what the bathroom looked like after Jitu had finished cleaning himself in it.


Post Script (05Jun 2010, some three months after this post, but what the heck):
I've changed my mind. I WILL go into the details of what the bathroom looked like when Jitu had finished cleaning himself in it. We're a family that has an unexplainably high interest in the human excretory system and we derive a lot of our jokes from it - it's a subject that somehow lends itself to hysterical laughter with us. It would thus be unfair to not record for posterity what the "Pathiji" saw.


So the "Pathiji", who was part of the group who had come from the Gurudwara to do the prayers at our home, went into the bathroom at 2300 hours to take a bath before his turn to sit at the "paath". He came out at 2305, looking extremely uncomfortable and and informed us that someone had had an upset stomach and not been able to empty his bowels in the pot and had, in fact, done ite everywhere on the floor. His relief on being reassured that the yellow stuff on the floor was just "ubtan" was quite touching.